I love looking at holiday lights because December has such little light.  This year we saw a few houses that I want to highlight.  Here is an article about the lights in Saugus, MA.  Here is a second article.
The house below had a ONE NIGHT ONLY display of Chanukah Inflatables in Newton, MA. 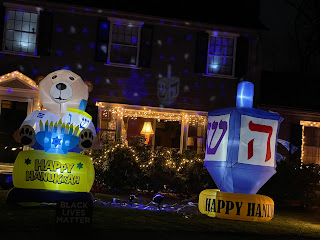 This house below is on Puritan Lane in Saugus, MA off the Lynn Fells Park Way. 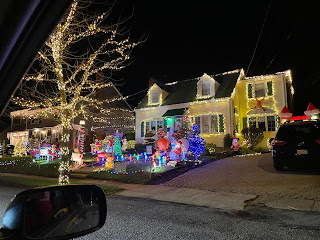 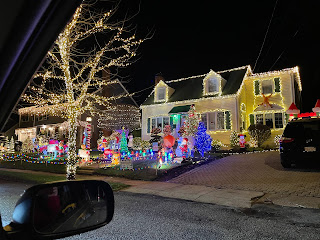 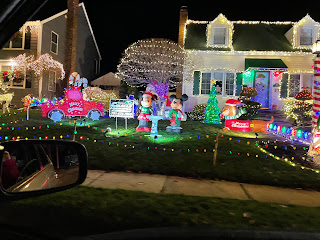 This was on a side street also, but I can't remember the exact address. 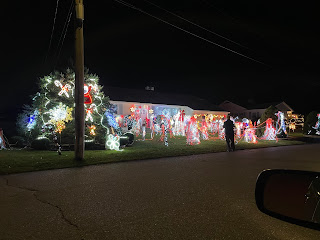 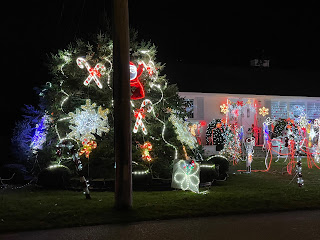 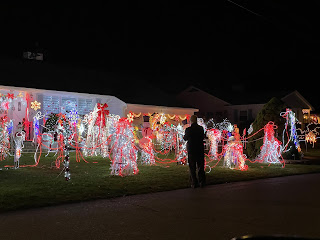 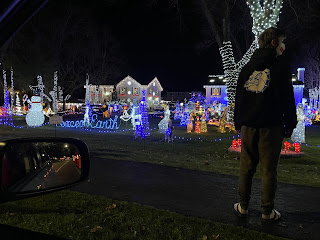 Posted by sfweitzman at 9:16 AM No comments:

Massachusetts Conference for Women - Manage Your Mindset for Maximum Success

I attended a session with Mel Robbins and she was great.  The take-aways for me are

Posted by sfweitzman at 9:36 AM No comments:

Yotam has NOT disappointed me!  Just made his ONE PAN ORECHIETTE PUTTANESCA and all four of us thought it was delicious!

1 15 ounce can of chickpeas, drained, rinsed and dried

1 t paprika (I get mine from the Spice House in Evanston, IL)

3/4 c green olives, pitted and cut in half

In a large sauté pan (that has a lid) combine 3 T olive oil, garlic, chickpeas, paprika, cumin, tomato paste and 1/2 t salt and cook over medium heat.  Cook for 12 minutes, uncovered, stirring every once in a while.  Remove 1/3 of the chickpeas and reserve in a bowl for later.

In a small bowl, combine the parsley, lemon zest, capers & olives.  Add 2/3 of the parsley mixture to the pan, with the grape tomatoes, sugar and caraway seeds and cook for 2 minutes on medium-high heat, and stir.  Add pasta, stock, water and 3/4 t salt and bring to a simmer.  Decrease heat to medium, cover and cook for 12 minutes (see if the pasta is done, and if not cook another two minutes).

Posted by sfweitzman at 4:37 AM No comments:

As some of you know, I am a planner.  I like to plan our meals and buy what we need at the grocery store once a week.

Posted by sfweitzman at 7:01 AM No comments:

Eclairs - I made my own!

Normally, I have no issues baking anything.  After watching the Great British Baking Show, I was inspired to try to make eclairs.  I have time to try, now that I am not driving two kids around all over the place.

BUT no, I found that the pastry shells were the easy part.  The pastry cream took a few tries.

Here is the end result: 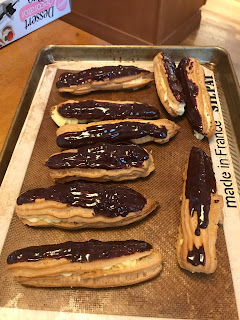 How to make the shells:

Combine the water, butter, and salt in a medium-sized saucepan, heat until the butter has melted, and bring to a rolling boil.

Remove the pan from the heat, and add the flour all at once, stirring vigorously.

Return the pan to the burner and cook over medium heat, stirring all the while, until the mixture smooths out and follows the spoon around the pan; this should take less than a minute.

Remove the pan from the heat, and let the mixture cool for 5 to 10 minutes. It'll still feel hot, but you should be able to hold a finger in it for a few seconds.

Transfer the mixture to a mixer, and beat in the eggs one at a time; it'll look curdled at first, but when you add the last egg it should become smooth. Beat for at least 2 minutes after adding the last egg.

Remove the pastries from the oven. Make a small slit in the top of each, and return them to the oven for 5 minutes, to allow the steam to escape. Place them on a rack to cool. When they're cool enough to handle, split each in half to make top and bottom pieces; splitting and exposing the centers to air will help keep them from becoming soggy.

In a medium saucepan, heat the milk over medium heat.

In a bowl, whisk the egg yolks and granulated sugar until light and fluffy.

Add the cornstarch and whisk vigorously until no lumps remain.

Whisk in 1/4 cup of the hot milk mixture until incorporated.

Pour the mixture through a strainer back into the saucepan. Cook over medium-high heat, whisking constantly, until thickened and slowly boiling.

Remove from the heat and stir in the butter and vanilla. Let cool slightly.

Cover with plastic wrap, lightly pressing the plastic against the surface to prevent a skin from forming.

Chill at least 2 hours or until ready to serve. (The custard can be made up to 24 hours in advance. Refrigerate until 1 hour before using.)

To make the icing: Place the chocolate chips or chunks and cream in a microwave-safe bowl or measuring cup.

Heat over low heat (or in the microwave) until the cream is very hot.

Remove from the heat, and stir until the chocolate melts and the icing is smooth. Spoon over the éclairs, spreading to the edges. Serve immediately.

Posted by sfweitzman at 11:20 AM No comments:

Last night I tried a new recipe from SkinnyTaste - One and Done.  I adapted it a bit due to ingredients, but it was an easy, quick dinner for the family.  Three out of three of us liked it.  This recipe serves three.

Heat a large skillet over high heat and add 1/2 T of oil and garlic and cook for 30 seconds, until golden.  Add tomatoes, 1/4 t salt and pepper.  Cook three minutes.  Add spinach and cook for 1 minutes and transfer to a medium glass bowl.

In the pan, put the remaining oil, zucchini noodles, remaining salt and pepper and cook for 2 minutes over high heat.

Divide noodles over 3 plates, top with vegetables, parmesan, burrata and basil and serve. 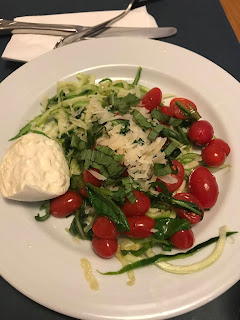 Posted by sfweitzman at 4:06 AM No comments:

Yotam Ottolenghi!  A wonderful chef with creative flavors.  He was supposed to come to Boston this year and I had tickets to hear him speak, but we all know how 2020 turned out and there was no event.

But, Yotam's new cookbook was released last week, and I have already read it, and made one delicious recipe.

1 pound spaghetti (I purchased it, but you could easily make your own)

1 T za'atar (I get mine from the Spice House in Evanston, IL)

2 tsp ground pepper (I don't measure it.  I grind until it is right.)

Cook the spaghetti according to the box with some added salt to the water.

Before draining, scoop out two cups of the pasta water and reserve.

In a large non-stick sauté pan, melt the butter on high heat.  Then add 1 T za'atar and the pepper and cook for a minute.  Stir.  Add water, and heat til boiling.  Boil for 5 minutes.  Add pasta and stir until pasta until well coated.  Add parmesan in two batches and keep stirring.  Make sure first batch of cheese is fully melted before adding the second batch.  Then add pecorino and continue to stir until cheese is melted.

Transfer pasta to bowl and finish with olive oil, a pinch of salt and if desired a pinch of za'atar.

Serve with a green salad.

Posted by sfweitzman at 4:41 AM No comments: